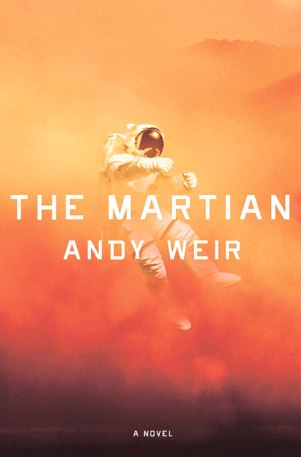 I have a crush on Mark Watney. I feel like I need to get that out of the way. Also, why aren’t we worshipping duct tape? Okay, moving on.

If asked, I would not consider myself a big fantasy or sci-fi reader, but that is obviously changing if you take a look at my last several books. I have figured out why I have shied away from these works in the past – more often than not they are about plot, plot, plot and not about characters. I am ALWAYS more interested in the character than I am about the action. Don’t give me a trope or a cypher, give me a person. What Andy Weir has given us character loving sci-fi readers with The Martian is a character we can root for and love, and hope to have friends like (seriously, I would totally date Mark Watney were he a real person and not a fictional character) while simultaneously giving us huge amounts of plot to read through and wonder how our characters are ever going to get through it. It’s a tough balance, and most of the time Weir nails it.

The Martian is one of the most reviewed books around the Cannonball Read, and I won’t waste your time with a big plot description, mostly because this book is a very good example of its best to go in knowing very little. Suffice it to say that our mechanical engineer/botanist astronaut finds himself injured and alone on Mars following his presumed death (his bio readouts went to zero and his crew say him stabbed by flying metal) and his crews forced evacuation from Mars. He has some supplies, but not nearly enough to survive the years it would take for rescue, that is, if anyone knew he was alive or he had any way to communicate that fact to Earth.

Without veering into spoiler land, there are a handful of things that are keeping this book rounded down to a 4 star instead of up to a 5 star (although, the last page and  half almost had me making the change). There is a lot of science (as there should be) and while Weir does a great job of having Watney break things down into understandable phrasing (for example: One kilowatt-hour per sol is… it can be anything… I’ll call it a “pirate-ninja”). But that doesn’t mean that I didn’t find myself skimming the explanations of how Mark solved things, or didn’t. Also, the other characters that exist are not as finely drawn as Watney (it would be nearly impossible to do so, honestly) but I was often left cold with them. So we’re going with a 4.5 rating.

I am however cautiously optimistic about the movie. Just saying.