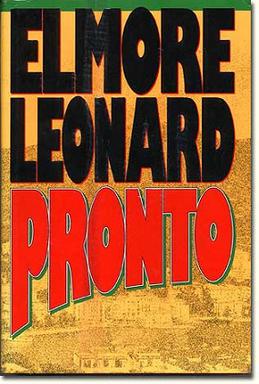 When trying to decide which book to read for the Book Riot Read Harder Challenge Task 2, a book written by someone over the age of 65, I discovered that Elmore Leonard hadn’t started his Raylan books until he was in his late 60s. Yes! I had been looking for an excuse to read some Leonard, and the Raylan books sounded particularly interesting to me because I have been on and off watching Justified on my Amazon Prime account. I knew I liked the character already, and I knew from interviews and reviews that the show hewed closely to the source materials in the big, important ways.

The story in Pronto the first Raylan book is centered on Harry Arno, bookmaker for the mob. He has been living and working on Miami Beach for decades and has skimmed off enough to have a nice healthy retirement. If only he had pulled the trigger and left when he when he turned 65. At 66, he has been caught up in a federal operation to take down his boss, Jimmy ‘Cap’Capotorto for racketeering. Since Harry was planning to retire to Italy anyway, so Harry figure now’s as good a time as any. Enter U.S. Marshal Raylan Givens who knows Harry’s trick – the bookie ditched him once in an airport while in the marshal’s custody. So Raylan’s determined to find the fugitive’s Italian hideaway before a cold-blooded Sicilian “Zip” does and whacks Arno and anyone else caught with him.

What Pronto boils down to is a chase caper. And it’s a good one. The pace is tight and crisp; the characters pop from the page showing that Leonard was an author in control of his craft. There were a few drawbacks for me notably that the book shows its age. Published in 1993 there were certain phrasings which pulled me out, and there’s a bit of a technology/changing landscape of Miami problem too. Not that Leonard didn’t write about Miami accurately – he absolutely did. It’s just that a lot has happened in the 22 years since this book was published.

I enjoyed this book and am glad I chose to go the audiobook route. I am looking forward to my next adventure with Raylan and Harry, Riding the Rap.