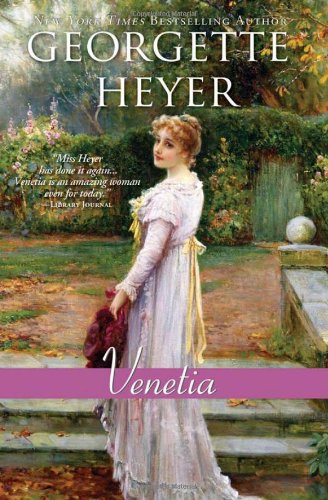 With our book club this year I have added the personal goal of reading the runner up choices as well. I figured if it sounded interesting enough to a gaggle of Cannonballers to earn their vote, surely it deserves my reading attention as well. First up on that quest is Venetia one of the runners up to The Bollywood Bride.

I’m not sure if listening to this one via audiobook caused me to not realize how much I was enjoying the story (weird word choice and craft issues can definitely stand out while listening, some things just sound wrong) but when I went about recounting the story to crystalclear I realized how much I loved the main characters of the titular Venetia and her paramour Lord Damerel. These characters are grown-ups with defined personalities, intelligence, senses of humors, and histories. All the things which make us love romance leads.

Let’s unpack them a little: first we have Damerel: an older confirmed rake who doesn’t care much about anything any longer. Or at least he thinks he doesn’t, but underneath there’s a kind man which his growing friendship with Venetia brings out. He starts out intending to seduce her—but respect for her and her brother soon make him realize that he can’t do that. Which leads to a moral conundrum for Damerel: his life has been so reprehensible that he’s no longer accepted in society (his two elderly aunts are trying to find an appropriately on the shelf/desperate wife to help make him respectable enough that they can make him their heir instead of his fop of a cousin), and marrying a sweet younger lady like Venetia would make people despise him even more. Which brings us back around to Venetia – witty, resourceful and not easily fazed by events that would make most ladies throw up their hands in despair (seriously, her brother sends home a pregnant wife and terrible nuisance of a mother-in-law that Venetia is told nothing about and she moves smoothly along like things like this happen all the time to ladies used to running the family estate in their brother’s absence). She’s 25 years old–just about on the shelf by Regency standards. Because her father was a damaged soul, Venetia has spent her entire life in a small town with a very limited circle of friends and acquaintances, but she’s nevertheless well-read and socially adept, if rather innocent in the ways of the world, at least according to everyone else. She knows what she does not know and thinks that’s fine enough.

It’s charming to watch Venetia’s developing relationship with Damerel, they trade all manner of inside jokes (usually literary quotes and allusions that went over my head a bit) and they just understand each other. Their relationship is in turns witty and heart-wrenching since these are two characters who likely shouldn’t end up together on paper, but you as the reader are rooting for them in a major way since the other two men attempting to win Venetia’s heart made me want to punch them through the page and even Venetia is *this close* to rolling her eyes and hitting them with rolled up newspaper. There was also way more smolder than you might expect from a romance written in the 1950s in the style of Austen. Heyer never gives you anything more than a kiss, but that doesn’t stop her from making heat rising off the pages when these two are together.

This book is definitely worth the read.