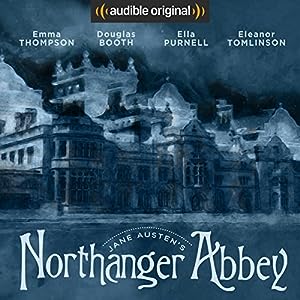 While I love almost all things Jane Austen, I have a slightly bumpy history with Northanger Abbey. I read it for the first time back in 2013 when I was trying to make sure I had read all of her major works, and this was my last (I still have the minor works, but I’m in no rush with those). 2013 is in some ways my dark Cannonball year. I hit a major reading slump during a depressive episode and didn’t read for months at a time. Northanger was my thirtieth book that year but I declined to review it, ending at 29 with Eleanor &Park instead.

I struggled reading it then partly because of where I was emotionally, and partly because I made the grave error of reading the introduction first which gave away all the fun of the novel. BOO to Alfred Mac Adam, professor at Barnard College, Columbia University. Last year a friend lent me Marvel’s Jane Austen’s Northanger Abbey comic to try it again and I came away from that experience much more positive about the story. The important thing I took away on second go was that this is Austen being down right hilarious in her authorial voice, I was not sad to revisit it once more.

Northanger was the October selection for the Go Fug Yourself book club on Goodreads. I decided to bump my audio copy of Northanger up the to read list and get to it. What I hadn’t realized was that this was yet another adaptation, in the vein of the comic I read last year. Anna Lea had taken Austen’s novel and broken it up into an audio drama which Audible cast masterfully. Seriously, it features Emma Thompson as the narrator/Austen as well as Eleanor Tomlinson, Ella Purnell, Jeremy Irvine, Douglas Booth, and Lily Cole. By further pulling the narrator’s voice outside of the goings-on of Catherine we the reader are treated to an even more biting commentary of the gothic novels promulgated in Austen’s time.  Also, it doesn’t hurt to have Austen’s observations delivered in the biting tones of Emma Thompson.

I am enchanted with the steadfast goodness of Eleanor Tilney, the bright eyed innocence of Catherine Morland, and the textbook baddie nature of John Thorpe. I find myself now much more positive in my appreciation of this work than I was four years ago when I encountered it for the first time.

This book was read and reviewed as part of the charitable Cannonball Read where we read what we want, review it how we see fit (with a few guidelines), and raise money in the name of a fallen friend for the American Cancer Society.