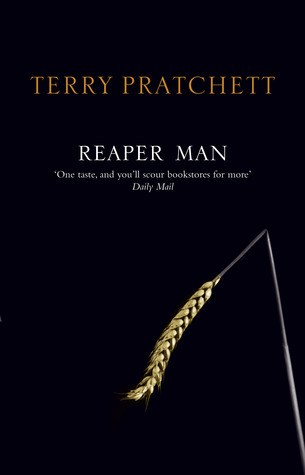 Its been quite awhile since I read my last Discworld novel, but I wanted to read Hogfather this year (a goal I will be missing by a few days, but I’ve got it out from the library) and my need to read the various subseries in their orders meant I decided to go back and pick up where I left off with Death. I found myself with Reaper Man (and Soul Music) in my to read queue. Death (in all caps) is a loveable character through and through so I didn’t mind at all taking a side trip to get to my eventual destination.

Reaper Man chronicles what happens when Death is forced into an early retirement and all of the life forces of those who die before the new Death is online get backed up in Ankh Morpork. Taking us through that vein of the story is Windle Poons and everything else that has died since Death lost his job. The novel turns into an ever-escalating mass of controlled chaos where metaphors become reality, cities lay eggs, and swear words pop into physical existence as twittering, flying creatures. Thi certainly isn’t a treatise on the human experience (although my gut instinct is that taken together Discworld is) it does say some very specific (and hilarious) things about the human condition.

However, about a third to a full half of the book didn’t work well for me. I liked Windle Poons fine, particularly after he comes back to the world undead and in search of answers, but the madcap adventures of the Unseen University staff fighting off the trolleys and everything else popping to life from the extra life force hanging around left me feeling flat. I’m not really worried though, Death and his newish personality are a delight, as is the Death of Mice.

“LORD, WHAT CAN THE HARVEST HOPE FOR, IF NOT FOR THE CARE OF THE REAPER MAN?”

This book was read and reviewed as part of the charitable Cannonball Read. We will be beginning our ELEVENTH year in a few days and we are always looking for new reviewers who want to read and review and say “fuck you” to cancer.