Five students walk into detention, they have little in common, other than that they were all caught with phones in class, and all five claim that they were framed and that the phones weren’t theirs. But only four walk out of that detention alive. Number five is dead and the other four all have motive and opportunity. Who is guilty? What really happened? That is the story which unfolds in One of Us is Lying.

However, it isn’t the only story that Karen McManus is telling. The book is told from the four perspectives of the suspects and the plot naturally expands from dealing exclusively with the murder to each character’s personal lives.  Here, instead of providing differing perspectives of the same scene, as many contemporary whodunits do the story lines simply separate as each character deals with the notoriety as well as the pressures after their deepest secrets are revealed.

We begin with each character in their stereotype: a princess, a jock, a brain, a criminal, and the self-described omniscient narrator.  But they don’t stay there, McManus builds these stereotypes out and deals with the pressure to succeed, having to survive on your own too young, coming to terms with your sexuality, dealing with unhealthy relationships, notoriety, mental illness, and addiction all get dealt with on the page, which makes it for an even more believable jaunt into a high school setting. It had its faults, but as a debut I can already see what McManus’s potential looks like and I’m cautiously excited in that regard.

I was able to piece together what really happened without too much difficulty, but that didn’t make it any less enjoyable. In fact I read this book in big gulps, it reads fast. I found myself absorbed in the goings on, interested in the various perspectives, and waiting (impatiently) for the next shoe to drop. The way that this book is structured it could translate to visual media quite easily, and I wouldn’t be surprised if we see it on the big screen or small screens via a streaming service limited series. 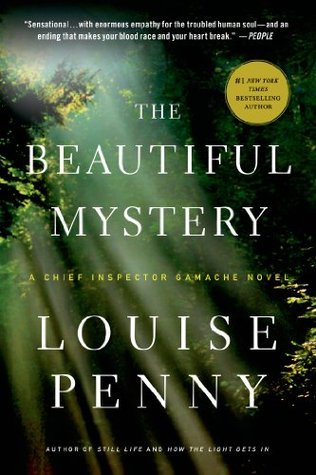 It turns out that this year’s Cannonball book is an Inspector Gamache book, and that seems oddly fitting.

I have chosen to spread out the Inspector Armand Gamache books instead of mainlining them. I read them in the seasons they are set, and it always proves to be something to look forward to. Following the disappointment of In Praise of Hatred I needed a comfort read, and Gamache is that for me. Luckily enough, autumn in northern Quebec is now, so we were all set.

Louise Penny stretches as an author in each book, and is often trying something new. In the eighth book in the series Penny gives us our first true locked room mystery. A monk is murdered in a cloistered monastery, and one of the brothers is guilty. It is up to Gamache and Jean Guy Beauvoir to travel to the remote Quebec wilderness to be some of the first outsiders ever admitted to St. Gilbert entre les loups to solve the case. The mystery of the murder is relatively straightforward, the biggest obstacle being to decipher what the murder weapon was and who had opportunity. Up until the final denouement, I was vacillating between two possibilities.

One would think I have learned my lesson with Gamache books: be careful what you ask for in the world of Three Pines. After A Rule Against Murder I was impatient to return to Three Pines, and The Brutal Telling put me through the ringer as the small town and all the characters I care about were raked over the coals. At the end of book seven, A Trick of the Light, I said that I was “exceptionally excited to spend more time with these two characters based on where we left them emotionally”. Well, I got my wish as Beauvoir and Gamache work this case solo, away from everyone else, making the book almost exclusively focused on their interactions and relationship. Woo boy, did it nearly break me.

Beauvoir has returned from rehab and has begun quietly dating the love of his life, Annie Gamache. Series readers (or at least ME) have been tracking this pairing since the beginning of the series, and the shootout at the Factory in Bury Your Dead serves to rattle each character’s status quo. We are allowed even further into Beauvoir’s mind in A Trick of the Light and the depth of his emotions regarding Annie. Now, we also know for sure how Annie feels, and we are treated to some domestic bliss at the beginning of the book as we see these two in the early months of a blooming relationship. We will not see it again in this book.

While investigating Beauvoir and Gamache are cut off from the rest of the world. But that does not mean their past doesn’t follow them there, in the form of memories (Beauvoir still struggles greatly with feelings of inadequacy and memories of the night he almost died) and the physical being of the superintendent. The Arnot case, and its fallout, are not as over as we may have hoped, and Gamache is under scrutiny once again. In a turn that rendered me nearly speechless, Beauvoir is turned against him. I of course looked ahead, book nine; How the Light Gets In takes place before Christmas. I will have a few months to wait to find out what the devastation is repaired for I must believe that it will be.

This book was read and reviewed as part of the charitable Cannonball Read where we read what we want, review it how we want (with a few guidelines), and raise money in the name of a fallen friend for the American Cancer Society.

This is the fourth Inspector Gamache book, set in the week leading up to Canada Day (July 1), and the Gamaches’ wedding anniversary. I’m glad I remembered when this one was set, because visiting with Gamache always tends to improve the spirits, and its ben HOT here and driving around in the car listening to Ralph Cosham while the AC did its job was a wonderful way to break up the day.

Unfortunately, I felt like this was the weakest thus far of the Inspector Gamache books. Let’s go Pro/Con style as to why I landed on 3 stars for this book.

With all of that, I’m still happy with the series and will be picking up the fifth book in the series, The Brutal Telling in the autumn.

The best things I can say about The Red House by A.A. Milne are that it is a tongue in cheek locked room mystery with an affable amateur sleuth hero and an amusing sidekick. This book was much more of a why-and-howdunnit than a whodunnit (which was a draw back for me), the charm of the work is more in the wit and friendship of the two main characters and their clever allusions to Sherlock Holmes and Dr. Watson.

The Sherlock and Watson stand-ins are Antony Gillingham and Bill Beverley. Antony is arriving at the titular Red House to visit his friend Bill, who is himself a guest of the owner Mark Ablett. What Antony doesn’t know is that he has stumbled upon a little country-house murder mystery. Mark’s ne’er-do-well brother is found dead in a locked office, with Mark also missing, and Antony decides to pick up the craft of sleuthing.

This novel is set just after World War I, and yet the war is never mentioned, which speaks greatly of its tone. Antony is described as the sort who never settles into any one profession for long, where Milne could have simply had him be a returning soldier to explain his lack of career. This is instead a little bit of escapist fantasy, Milne’s try at a genre that was immensely popular in the interwar period, providing an intellectual puzzle to distract the reader from the fact that their world was completely turned upside down.

While the narrative was entertaining enough, Milne did commit a few sins in my opinion. First, the murderer’s confession at the end of the book in the form of a letter left for Antony is a cop out of the first order. The second was in eliminating most of the possible suspects (including all the women, so that there wouldn’t be any love interests) by sending them away early in the story unnecessarily. This made for too few characters and possible villains to keep my attention over several chapters at a time. I picked up and put down this short novel (only 156 pages in my edition) at least a dozen times.

Had it not been for the way in which the mystery is resolved, I would have been tempted to give this ½ a star less. Sure, the culprit might be easy to discover but the how’s and why’s of the last 50 pages were much more pleasurable for me to read than the 100 pages which began the mystery. For those 100 pages I really had to push to finish. The characters were often flat, the pacing was slow and way too much of the book, in my opinion, consisted of lengthy conversations which droned on about the various theories of the crime as well as narrator asides highlighting that this was in fact, a book.