I don’t know why I hadn’t thought of food memoirs as their own thing. I’ve read a few, and I have a whole shelf on my Goodreads labeled “food related”, but I just never quite made the connection until Book Riot’s Read Harder Challenge included reading one and I had no trouble at all picking a couple to put on my to read list (most were there already). Cannonball Read loves Lucy Knisley, so I decided to start with hers.

Because graphic memoirs and novels aren’t really my cup of tea,I kept forgetting to stop and actually LOOK at the images that Knisley, a trained artist, spent so much time crafting for me to look at. I feel like a bad reader when it comes to this format. And it isn’t to say that I didn’t enjoy it, I absolutely did (please note 4-star rating), I just knew the entire time that I was probably missing about half the humor, because it’s all in the visuals. Knisley’s art might appear simplistic, but in reality its layered and precise. 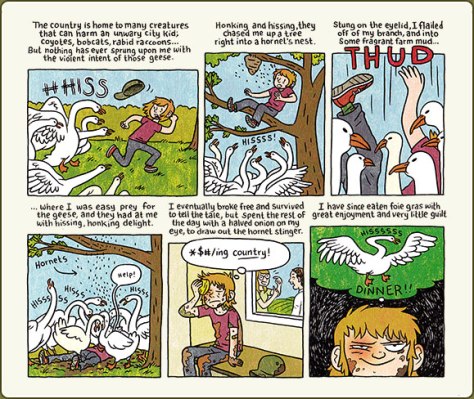 Knisley tells us the story of her life, from roughly birth (or actually, from before that) to about 22. She uses food, cooking, eating, and her mother as various framing devices for her narrative. Each chapter is its own story, and probably readable separate from the book as a whole. Each chapter is capped with a recipe, with fun, drawn instructions, that will be sure to make you hungry if the contents of the chapters haven’t already. (Seriously, I was not feeling 100% all weekend and not hungry at all, until reading this book on the couch all afternoon, then I was ravenous. The book may have cured me.)

I found the tone of this work to suit its contents, it’s a book about growing up, and the food memories that link that story together. It was also quietly charming and amusing. I don’[t know if I’ll be picking up more Knisley anytime soon (although her other books look great) but I can say that this one is worth your time.

::sigh:: I’m pretty sure the problem was me, and the fact that in the many years since this book was published I have watched many a show featuring Bourdain do exactly the kind of thing he originated in this work. In fact, one of the running asides in this book is his experiences with the camera crew that followed him as part of the series of the same name on The Food Network.

Here’s Goodreads’ rundown of what to expect with this one:

“The only thing ‘gonzo gastronome’ and internationally bestselling author Anthony Bourdain loves as much as cooking is traveling. Inspired by the question, “What would be the perfect meal?” Tony sets out on a quest for his culinary holy grail and in the process turns the notion of “perfection” inside out. From California to Cambodia, A Cooks’ Tour chronicles the unpredictable adventures of America’s boldest and bravest chef.”

Anyway, My problems with this book were two-fold. 1. The shtick of Bourdain traveling around and eating local food amongst locals has over a decade worn thin. 2. The writing was uneven. And that sums up my general feeling about the work. The parts I enjoyed were fine, the rest left me skimming. If you’ve spent any time with Bourdain on No Reservations, or The Layover, or Parts Unknown you probably don’t need to read this book. Unless you have a pressing need to read Bourdain’s words about his emotional responses to Vietnam or Cambodia. Then maybe this book is for you. I would suggest Kitchen Confidential instead. Although I still plan to read Medium Raw next year.

There’s a certain amusement that comes from knowing more than the teller of a story. I don’t often suggest reading memoirs or the like so far after their publication dates (see my experience with Denis Leary’s Why We Suck earlier this year). But, there was a delicious sort of fun to be had reading Anthony Bourdain’s Kitchen Confidential and knowing what his life would turn out like in the decade which followed the book’s publication in 2000. He certainly, had no idea.

You’re likely familiar with Anthony Bourdain, whether from his old show on the Travel Channel, No Reservations, or his current show, Parts Unknown, on CNN. Or from his books which had been reviewed rather frequently for CBR. I’ve always enjoyed watching Bourdain on his television shows, and guesting on Top Chef. My sister and her fiancé are both trained chefs working in food service and I thought that reading about Bourdain’s experiences would give me a better insight into what they do for a living. It did, to a degree.

Kitchen Confidential was his first foray into biography, and has been followed by A Cook’s Tour and Medium Raw as well as nearly a dozen other books. Bourdain is, bless him, exactly whom you’ve known him to be from the moment the book begins in his Chef’s Note. The person you’ve likely seen on your television screen is also who you hear reading his words. He is sarcastic and sardonic, bracing and biting and always humorous. He is also truthful about his life, his experiences, and how they aren’t necessarily the experiences of everyone in his field. In Kitchen Confidential Bourdain talks about his youth, his discovery of real food, the delicious possibilities of eating outside your comfort zone. He tells us about his discovery of life in the kitchen, his journey through school and his working through the kitchens of New York. He’s also bracingly truthful about his experiences with drug and alcohol, and what his greed and addiction cost him along the way.

I mentioned before that there as a joy in knowing where Bourdain’s life was heading. At the end of this book Bourdain talks about the joys of being the chef at Les Halles in New York, and how he hoped to stay there. Throughout the book Bourdain makes digs at name chefs, including Eric Ripert and Emeril Lagasse. He’s only a few short years from running in the same circles as these men and leaving behind the punishing world of line cooking for years as a television personality and author. But the love of food remains the through line in the life of Anthony Bourdain. I’m going to happily keep reading and watching to enjoy Bourdain’s view of the world.

I picked this one up on a lark. I’m a sucker for girly movies which are played too many times on Basic Cable. It should be obvious that I watch a lot of Diane Lane movies. One of them is Under the Tuscan Sun based on the book by Frances Mayes recounting her experience moving to Italy. When I picked up the book I hoped to discover more of the characters whom I loved so much on the screen: the young lovers, the Polish laborers, and the Fellini-crazed woman in town. This was simply not to be.

All the book and movie have in common are the female lead, Frances, and her home – Bramasole. Bramasole and the Tuscan countryside drive the narrative. To quote another reviewer on Goodreads “Plot: Author summers in Tuscany, buys an old farmhouse, refurbishes it, travels through Italy, and cooks constantly.” This is pretty much it folks. But the story of the multi-year restoration and refurbishment of Bramasole make for an entirely engrossing account of what life can look like when you dare to dream a little bigger than you let yourself dream before. There are other parts of the book, for example traveling to Etruscan graves, which are less captivating. In fact I was as bored reading about her excursions as her husband seemed to be in doing them.

Earlier in the Cannonball I reviewed Rob Lowe’s memoir and said that one of the more interesting facets of that autobiography was his seeming openness to talk about the events which had occurred in his life. There is a similar chapter in Under the Tuscan Sun, which serves almost as an epilogue, in which Frances discusses how the movie went about filming in Tuscany and what it was like to see yourself and your story taken apart and reworked. This was intriguing reading for me.

While this may not be the book you are looking for if you love cheesy Diane Lane movies (which is a shame since the edition I read has a picture of Lane as Frances on the cover) it certainly is a nice slice of life to visit for a change of pace.  Since she cooks and cooks it is also a nice treat that many of the winter and summer recipes are included in the book. I only wish that I had remembered to photocopy them before I returned the book to the library!